How to improve your coding skills using ChatGPT

ChatGPT can generate code snippets and solutions to coding problems quickly and efficiently. Here’s how.

Blockchain-backed digital messaging applications are forecasted to skyrocket in value in the seven years with a projected 43.6% compound annual growth rate.

Bitcoin (BTC) hovered around $23,000 on Feb. 1 after sealing its best January performance in 10 years.

Data from Cointelegraph Markets Pro and TradingView confirmed a monthly close of around $23,100 for BTC/USD — its highest since July 2022.

The largest cryptocurrency finished the first month of the year up 39.6%, according to statistics from Coinglass.

The impressive performance emboldened bulls, many of whom had kept the faith despite mass misgivings from more conservative market participants.

Experts opine that the Indian government needs more data and time to decide on rigid tax policies, given it has been only ten months since the tax laws were introduced in March 2022.

Toyota to explore blockchain use cases via DAO hackathon

The Damus app is powered by Nostr which uses decentralized relays to distribute end-to-end encrypted messages.

Bitcoin (BTC) had a rough time all throughout 2022.

But fresh on-chain and futures market data show positive signs that the leading cryptocurrency by market capitalization has started to recover.

After a bevy of short liquidations, the futures market is pointing toward renewed equilibrium. According to data from Glassnode, short position liquidations cleared out unhealthy market speculators, on-chain and exchange data now point to an improving spot market and exchange netflows.

A large group of investors that were previously at a loss is now back in the category that Glassnode analysts label as “unrealized profits.”

Futures data typically hold an equilibrium between longs and shorts. As the market moves, investors tend to update their futures to avoid liquidation. Conversely, in mid-January, investors were caught off guard which resulted in an all-time high of 85% short liquidations. 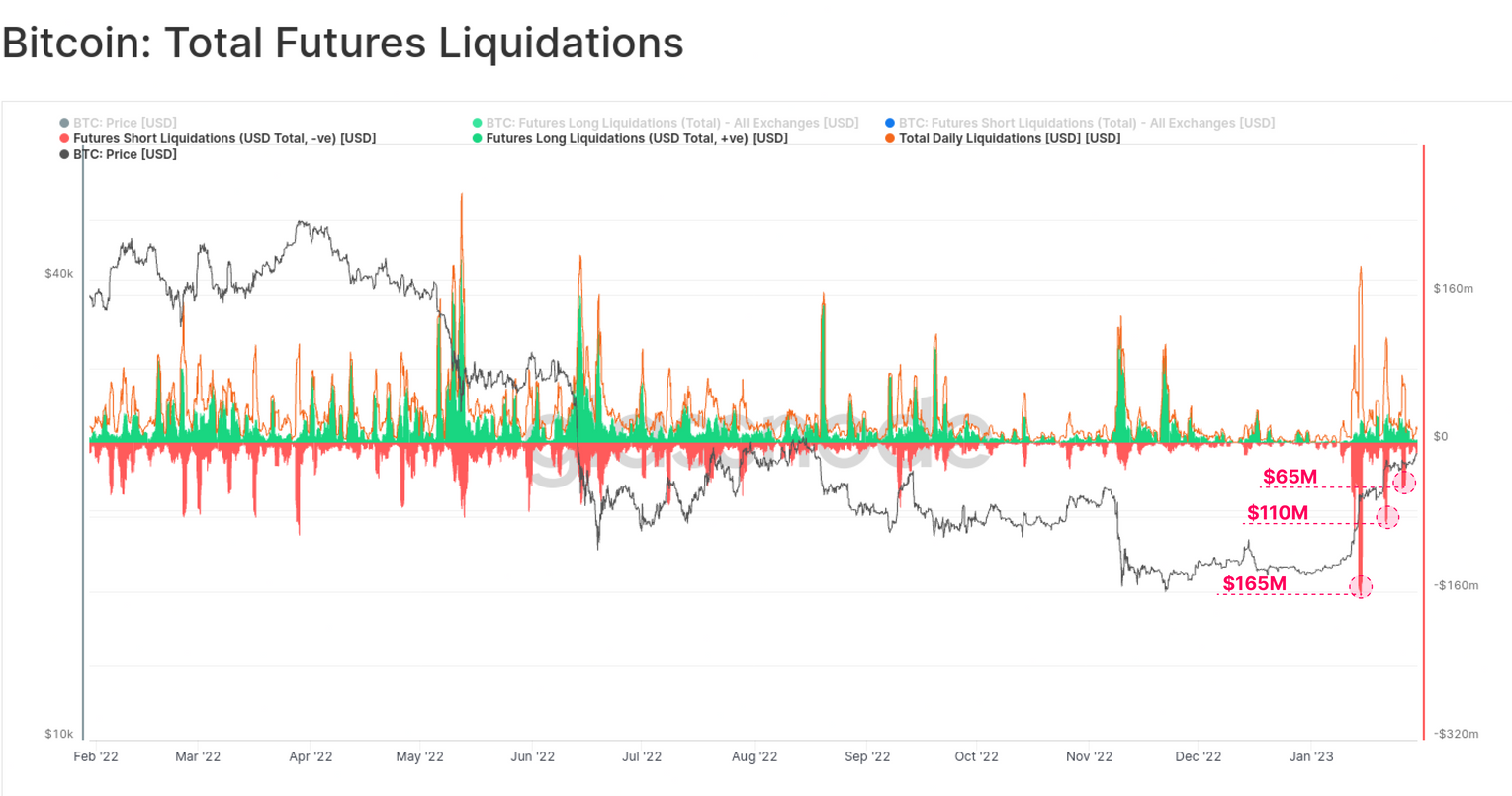 According to SIMBA Chain, the investment will go toward developing blockchain applications that will be used by several government organizations.

Rumor has it that Dogecoin could shift to proof-of-stake — What does that mean for miners?

Dogecoin shifting to proof-of-stake would be good for the environment, but what impact would it have on miners and ASIC manufacturers?

Rumor has it that Dogecoin could shift to proof-of-stake — What does that mean for miners?

There are rumors that Dogecoin could switch from proof-of-work to proof-of-stake (PoS).

Do I know if Dogecoin is switching to PoS?

Do I think it’s going to PoS? Probably not.

But I love the “what if” game.

The rally in cryptocurrency markets started in early January with a spike in heavily-shorted altcoins and Ethereum (ETH) liquid staking derivative (LSD) tokens due to the upcoming network upgrade in March. Soon gains started to show across the board as buyers started to play catch up.

The improving macroeconomic conditions, such as reduced inflation and a stable job sector in the United States, provided additional tailwinds for the positive rally. Bitcoin (BTC) is en route to its most impressive closing for January since 2013. Its price has gained 40% year-to-date from the opening value of $16,530.

Another important catalyst for January’s rally was a short squeeze across the crypto market. After the FTX debacle and the lack of bullish narratives for the niche space, most investors expected growth to slow down in 2023.

There are unresolved issues such as potential Digital Currency Group fallout, geopolitical tension between Russia and Ukraine and recession risks due to the Fed’s aggressive quantitative tightening policies. Thus, most traders didn’t expect strong price rallies so early inthe year.

As it turns out, negative sentiment and crowded positions in the futures market continued to fuel more upside. There’s a strong chance of a pullback soon after steep gains. It remains to be seen if the pullback levels are attractive enough for buyers to turn it into a medium-to-long-term bullish trend. Let’s take a look at the top performing cryptocurrencies for January.

The program aims to provide selected projects with upfront seed funding of $30,000 in addition to mentoring, masterclasses and support from industry experts.

This is the first Ethereum public test since the Merge upgrade in September 2022. Developers said further testnets will be triggered in the coming week.

Bitcoin (BTC) rose above $23,000 into the Jan. 31 Wall Street open as markets braced for a fresh macroeconomic reckoning.

Data from Cointelegraph Markets Pro and TradingView showed BTC/USD gaining around 1% in a single hourly candle before the start of trading, overcoming resistance in place overnight.

With hours to go until the monthly close, the pair remained around $800 short of its weekend highs, which, at $23,950, marked Bitcoin’s strongest performance since mid-2022.

Inspecting the status quo, however, traders were unconvinced that the largest cryptocurrency would produce further gains in February.

January had produced upside of over 40%, making it Bitcoin’s best first month of the year since 2013. 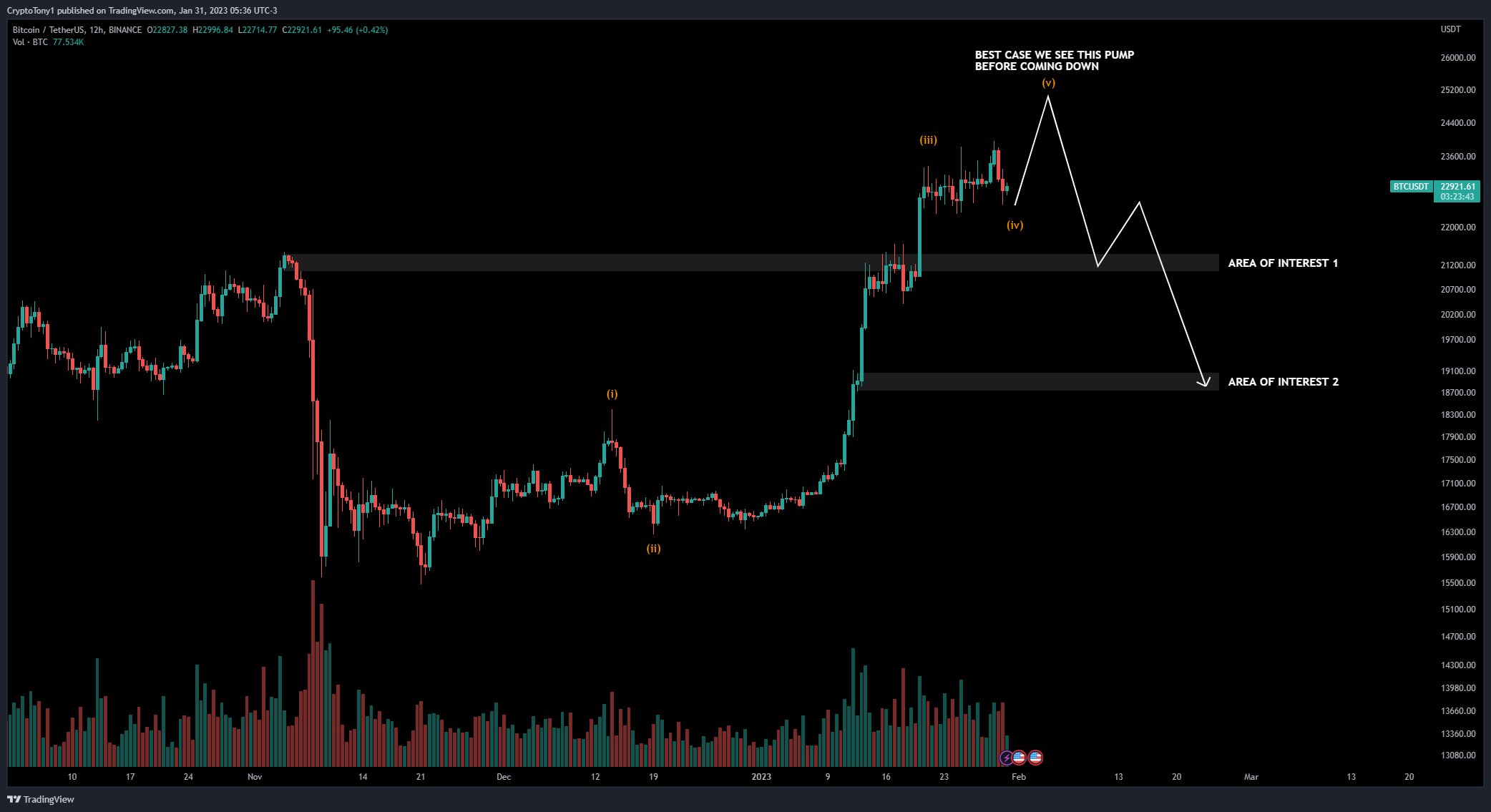 The electric vehicle maker earned $64 million in profits from Bitcoin trading, which was offset by a $204 million impairment.

What are reflection tokens, and how do they work?

We can’t blame Elon Musk for dreaming of moving to Mars — the human race has always been curious about finding a better life somewhere else.

But not everyone in crypto is looking up to the stars to find new worlds; others stay on earth and attempt to build a new micronation, or a crypto community, here. There are dozens of projects in development — and a few actually operational — including Liberland, Satoshi Island and Puertopia/Sol attracting interest from the blockchain world.

While many head out to sea to build their new communities, another option is to find land left over after conflicts. This is not as crazy as it sounds, and in the shifting territorial landscape after the breakup of the Yugoslavian empire, small pockets of land have turned up. Vít Jedlička, a Czech economist and Libertarian, founded Liberland on April 13, 2015 – on Thomas Jefferson’s birthday – on a small track of terra nullius (unclaimed land) on the banks of the Danube between Croatia and Serbia. At seven square kilometers, it is larger than Vatican City and Monaco and similar in size to Gibraltar.

The tiny nation is not yet habited despite boasting 785,000 citizens, all of whom currently reside abroad.

Jedlička wanted to form a new nation with low taxes and greater freedoms, and he found the land literally by Googling the term “terra nullius.” 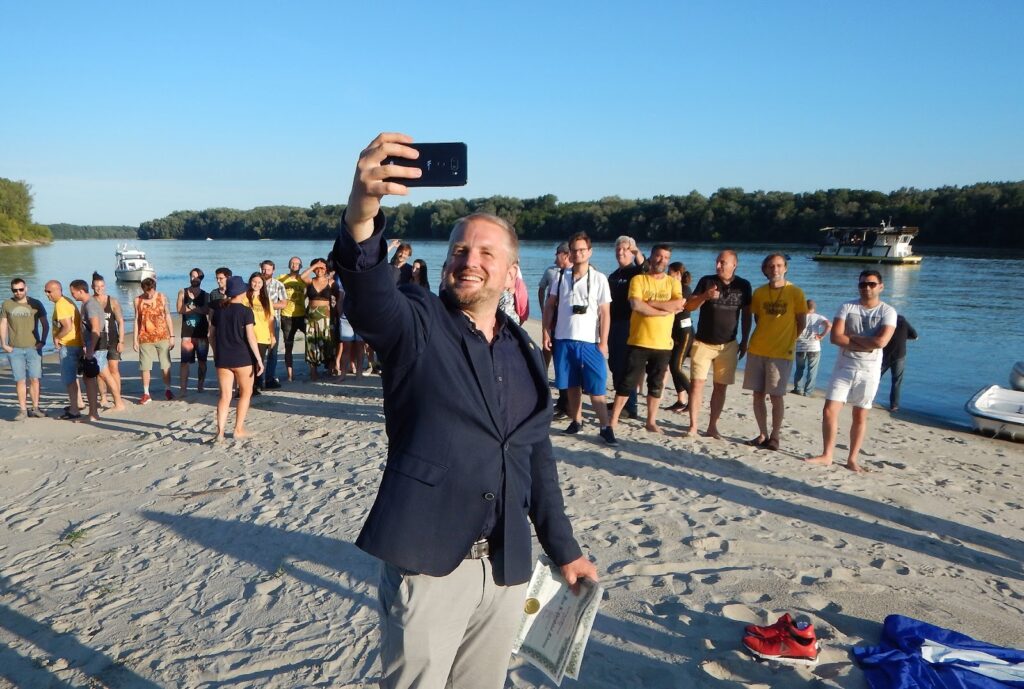 Bitcoin (BTC) is rapidly regaining its lost dominance in the crypto market so far into 2023.

The index typically rises when most crypto investors reduce their exposure to smaller tokens and seek safety in Bitcoin. The reasons include Bitcoin's better liquidity and lower volatility than alternative cryptocurrencies, or altcoins, primarily in a bear market.

As of Jan. 31, Bitcoin is up 38% year-to-date (YTD) at around $23,000. In comparison, the second-largest cryptocurrency, Ether (ETH), gained 30% in the same period, showing most investors remain gravitated toward Bitcoin so far in 2023.

From a technical perspective, the Bitcoin dominance index may rise further in the coming weeks as it reclaims its 50-week exponential moving average (the red wave in the chart below) as support. 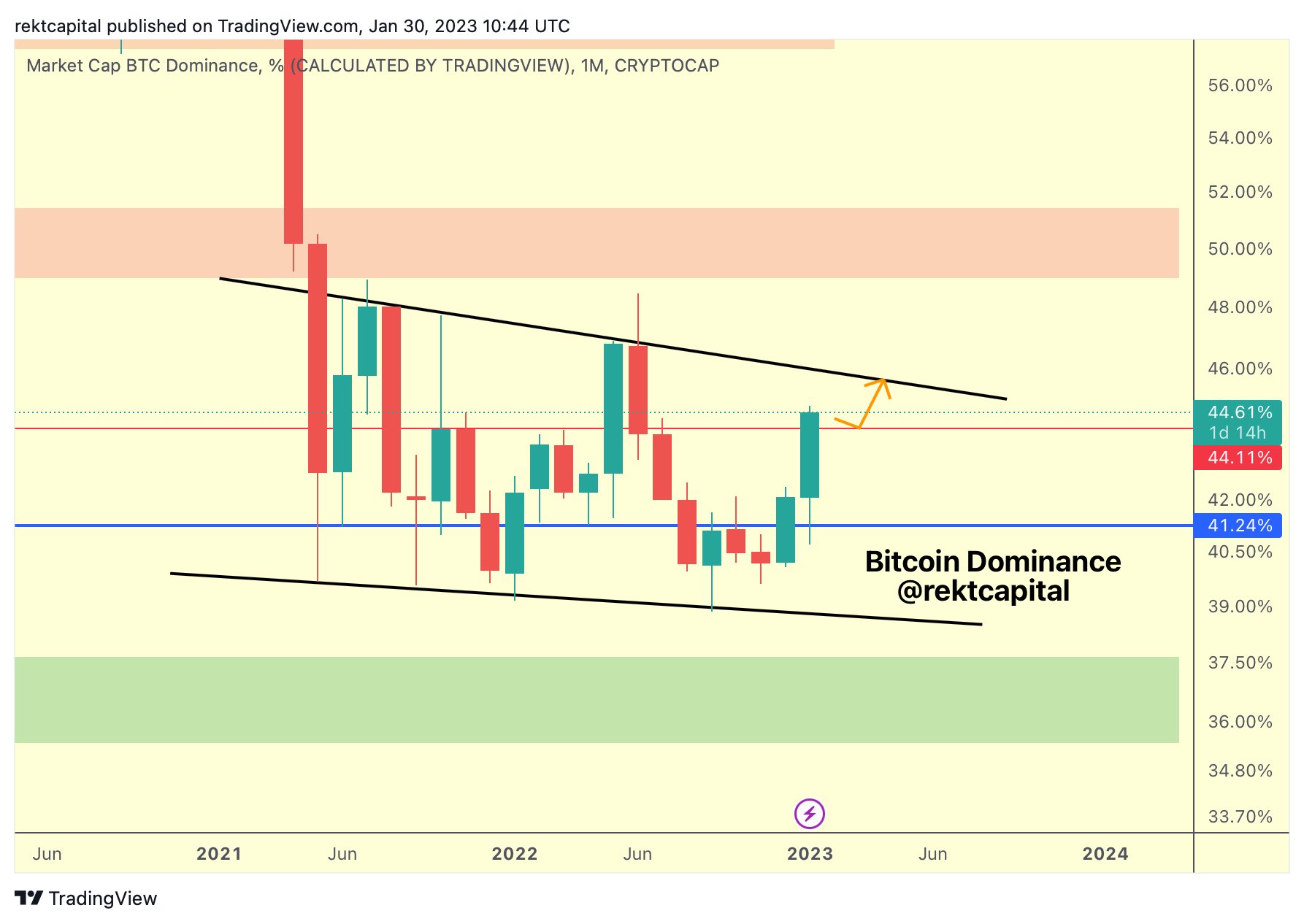 Top 5 Bitcoin documentaries to add to your watchlist

Bitcoin documentaries can serve as a tool for advocacy, helping to promote the adoption and acceptance of Bitcoin and other cryptocurrencies.